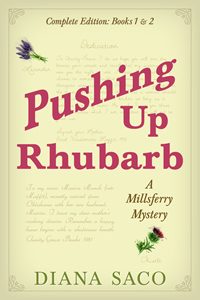 Summary: Following a suspicious death at a cooking contest, a frustrated writer-turned-PI finally finds inspiration through the prime suspect. Now all she has to do is keep her muse out of jail.

A mystery about a PI, an artist, and the vegetable that comes between them.

Private investigator Nina A. Braco longs to be the best-selling author of a literary classic. No matter how hard she tries, however, she just can't come up with that perfect story idea. When Monica Munch dies at the Millsferry Annual Bake-Off, Nina joins the investigation and meets children's book illustrator Chloe Owens. A free spirit herself, Chloe prods Nina to stop worrying and start writing. The only problem is that Munch's death starts to look like murder, and Chloe becomes the prime suspect. To save Chloe, Nina won't just have to uncover the true story behind the death. She's going to have to figure out a way to tell it convincingly. She will also need some proof.

Helping Nina along the way are several friends, including her Cajun-Midwestern associate, a steampunk-loving horror-movie theater owner and restauranteur, his health-conscious computer-specialist partner, a charitable attorney with a fondness for cakes and cookies, and the little old lady who moves in with Nina uninvited and vows not to leave her until she is fixed. Chloe also has friends who would like to help. But one of them is the sheriff who has to arrest her and another one happens to be married to the prosecutor.

Nina and her friends' combined efforts may prove insufficient against the feast of evidence the skillful town prosecutor is preparing for the jury. Making matters worse is that Monica Munch and Chloe Owens were arch rivals, and everyone knew it, including the victim's husband and her twin sister, who seems to have arrived in town to stir up trouble.

Somewhere in all the chaos, Nina struggles to find out who really killed Monica Munch so that Chloe Owens doesn't have to go to prison for the rest of her life. Frustrated by the lack of evidence, Nina goes to desperate lengths to clear her new muse. She interviews nudists, attends a séance, and even commits a tiny criminal act, all in pursuit of the truth.

Rhubarb, social networks and a community of affable geeks figure prominently in this cozy culinary mystery, the first in a series of novels set in the small, eco-friendly, high-tech town of Millsferry.